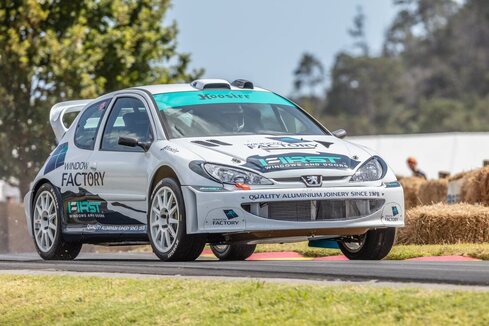 History:
Restored by Nick Marshall over a period of 15 years. The below is taken from the leadfoot festival 2020 competitor profile.

1999 Peugeot 206 WRC:
One of the most successful cars in World Rally Championship, Peugeot won the Drivers’ and Manufacturers’ Championships three years consecutively with the 206 WRC. Nick located this 206 WRC body shell in Ireland 15 years ago. The car was then transported to New Zealand, where the shell underwent a full recondition. Over the next few years Nick found a team in Italy looking to sell many parts, including a full dashboard, steering rack, anti-roll bars, intercooler, fuel tank, and engine. The engine came with an intake manifold, exhaust manifold and turbo. All it needed now was an X-trac gearbox to complete the major components. To keep the car 100% original, Nick found out Vaison Sport was servicing the 206 WRC cars in the French Championship and the company provided the remainder of the smaller components. All the wiring and ECU was abandoned in favour of a lightweight wiring harness with a Motec ECU, PDM and dash. This Peugeot was driven by Marcus Gronholm and Gillies Panizzi in the WRC.